Home is where you park it 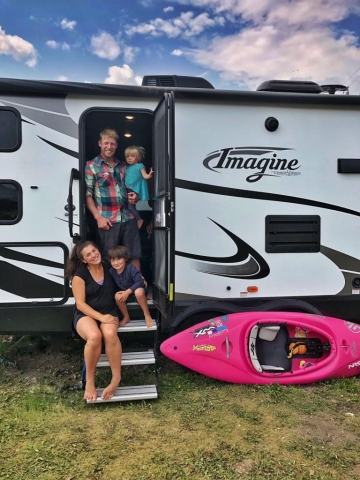 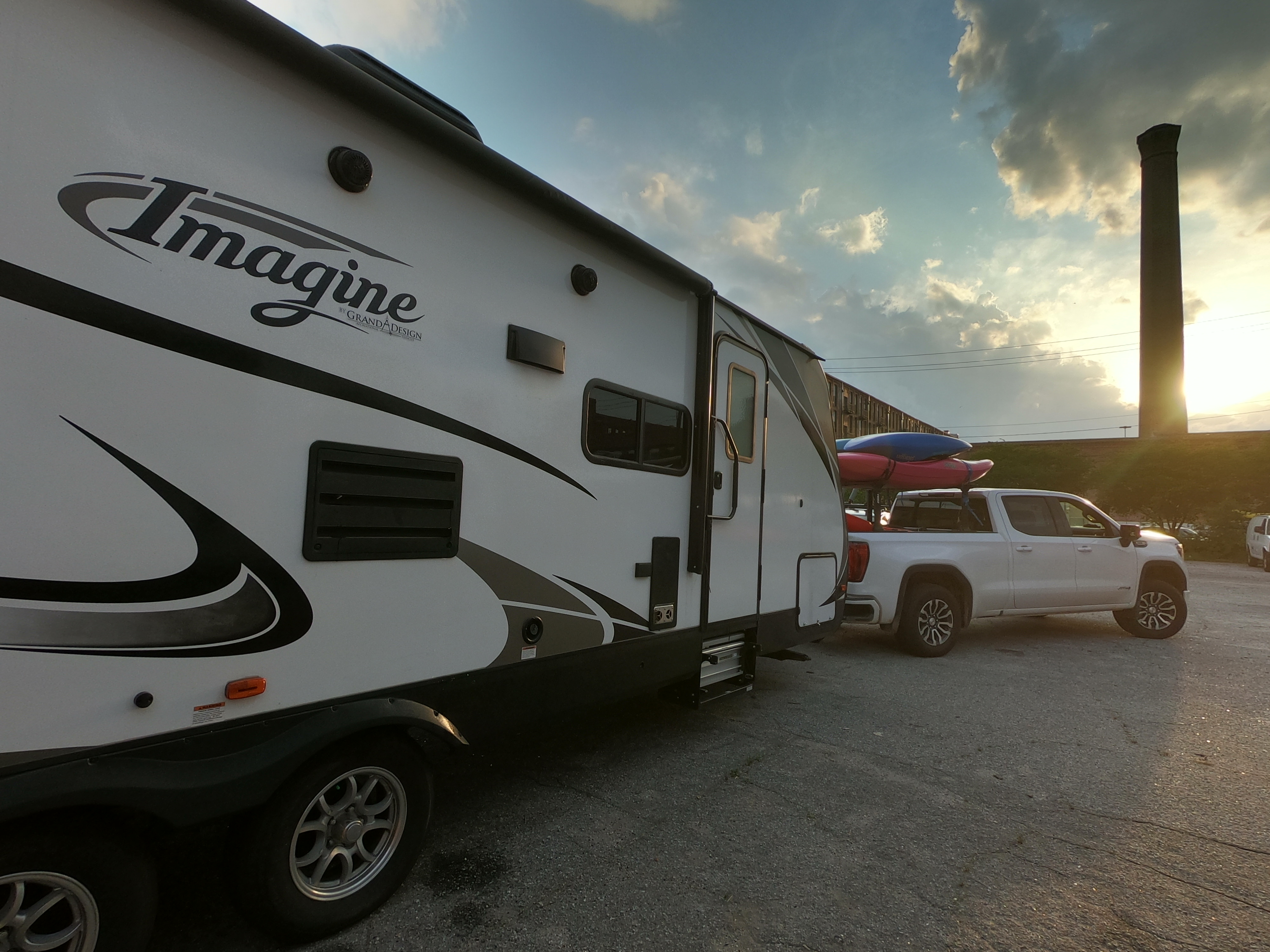 Home is where you park it.

But seriously though… How amazing is it to travel almost full time, and never feel like you’ve left home? To me this makes traveling so much EASIER! Instead of having to think about where we’re going to sleep, eat, and pee we can use that energy into – what other fun things can we do today?!

Living in our Grand Design Trailer has really shown me how much you can feel at home just about anywhere. Recently we had the pleasure of “living” in Columbus, GA for two weeks getting ready for a kayaking competition called Paddle South. This event has freestyle kayaking, kayak races and biathalon. The town opens up a parking lot across from where the events are held for out of towners to camp. It is seriously urban camping as we are butted against restaurants and the downtown strip. Camping was hard for those who didn’t have an RV or trailer as they would have to run to local shops to use their restrooms and fill water bottles etc. Not that its an issue or too hard, but it simply took time that could have been spent doing something else.

With the ease of being “home” we had lots of time to train, work, complete my son’s school and simply enjoy what Columbus had to offer. The days leading up I found awesome yoga studios, crossfit gyms, the BEST greek food, and endless kayaking!

Training days consisted of two sessions, one up at a smaller feature called Monkey Wrench hole where everyone worked on combining their tricks, and learning new moves. Then there was Good Wave where the event was held- Good Wave is a hard to surf big crashing wave that surges, but once in awhile its got a big green face and is great for throwing BIG tricks. It’s hard to compete on but super fun for surfing.

The days leading up to the event the water was all over the place so we were unsure on how the wave would be. The event also got combined into a one-day event versus over the whole weekend due to a Tornado warning. So Friday we picked up our numbers, had a competitors meeting going over the schedule and headed to the main street to enjoy the free Friday night concerts.  My daughter (2) almost got us kicked out when decided the fountain was for skinny-dipping… After wrestling her into clothes again we headed back to our trailer to get a goods night rest before our big day.

Saturday morning was a hustle of moving boats down to the river, getting the kids situated, sun blocked and ready for a day of sitting out in the hot sun. We had another competitors meeting to review the time frame for the day, and we went upstream for the first event- Down River Race. The kids stayed with their friends and adult friends and got ready to cheer us on.

The race was super fun as Columbus does have BIG water. Trying to pick the fastest line through the big rapids isn’t always easy and this river was hard to train on, as it wasn’t consistent in levels- so you never knew what you were going to get.  I impressed myself with getting 6th overall in the men, their was only one other female- Courtney Kerin and she got herself stuck in a hole (forgetting that freestyle was later).  Nick got 3rd in the men’s class behind Pat Keller and local hero- Bennett Smith.

Next was the freestyle competition- my favorite. The women didn’t go till later as we had rounds of men, and juniors going first. It was so impressive to see the junior girls tackling this BIG wave. Some of these girls at 11 showed so much confidence and enthusiasm, that I couldn’t wait to see them surfing,

The fun thing about a chaotic feature is that it’s anyone’s game! There is some luck in your timing on the wave, you could see this in the men’s and women’s classes as it didn’t matter how good you were, sometimes the wave would go green and your ride would be over. To counteract this they gave the finals contestants 4 rides instead of the usual 3. This upped your chance of having one good wave and one good ride! Nick had the most consistent and high scoring rides throughout finals with all of them being high scores. Stephen Wright had a great ride that JUST edged Nick off the top. But that’s how the game works in finals- its not about consistency, its who can score that highest in that given moment! Hayden Voorhees got thirst place in the Men’s behind Stephen and Nick with some very impressive rides.

In the Women’s class we had very few competitors, could be the big wave, timing and one of our contestants injured her rib the week before during training. We had the pleasure of Olivia McGinnis- one of the US’s top juniors joining us in the Women’s Class versus the Junior class. We had Courtney Kerin from New Zealand and we had a local girl who I didn’t have the pleasure of meeting before the event. With the wave being all over the place, the first thing we had to do is catch the wave. This was hard for several contestants. Once on the wave Courtney and Olivia both threw great moves. Luckily for me, I went out with the confidence of knowing we had 4 rides and had a high scoring ride on my very first one. This ended up being my highest scoring ride and held me in first throughout the rest of the finals.  Olivia took 2nd and Courtney 3rd.

The last event of the day was boater-cross, a fun, anyone’s game style race that involves 5 people going down a stretch of whitewater (usually with gates or buoys you have to touch) and the first one to the finish wins. (assuming they hit all the gates) This event ended short for Nick and I as Nick was pulling into a gate when the paddler behind him had his boat slide up onto his and clock him in the back of the head. Nick ended up having a concussion from the hit just behind his ear and just barely missing his helmet. Luckily it was the last round of the day for Nick. I opted out of boater-cross to assist him, and we quickly packed up to get Nick home so we could further assess his injury. (having dealt with concussions before we knew the severity of even a minor one after having had several) ‘

Even though the event didn’t end in a way we would have liked, we had an amazing time in Columbus, calling it home for several weeks this winter. Between the kayaking, hospitality and local businesses, it should be on everyone’s bucket list. IF you are into kayaking definitely plan on coming out for Paddle South as its an incredibly fun event with music, beer, and paddling of course!  Hope to see you there next year