Try Your Hand At Sourdough: A Nomadic Favorite

The tradition of making sourdough bread using a fermentation of flour and water (known as Sourdough Starter or Sponge), has been around nearly as long as humans have been baking things.  One of the oldest sourdough breads from an archeological excavation in Switzerland was dated to 3700 BC, but likely originates thousands of years earlier.

Sourdough was the normal method of leavening bread in Europe during the Middle Ages and was brought to the Americas by settlers.  Many people now associate Sourdough with the American Frontier and the western Gold Rushes. 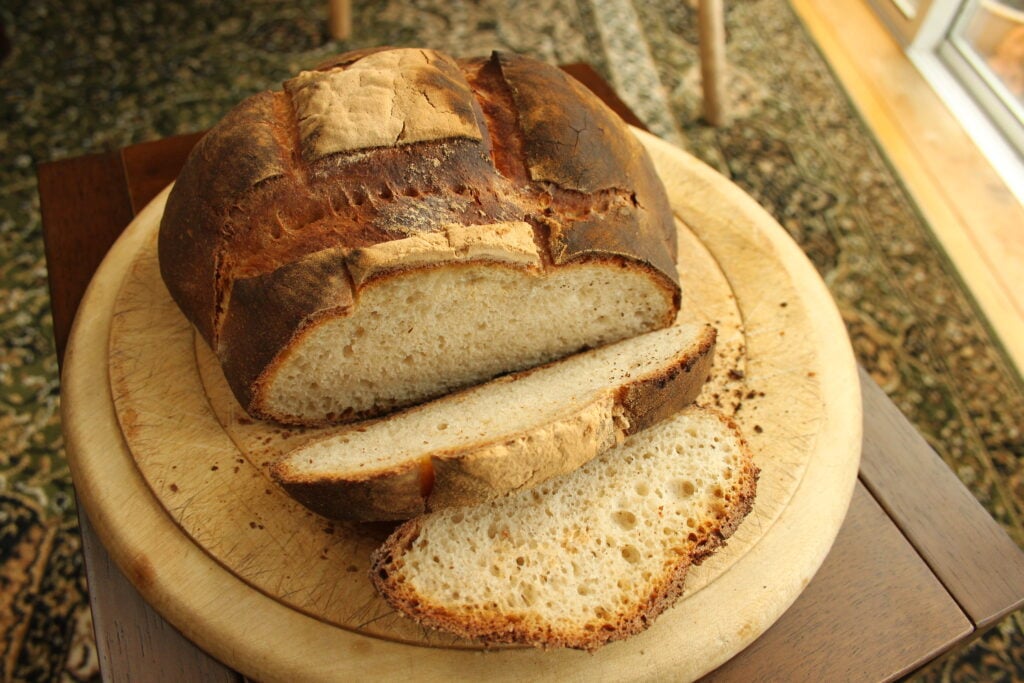 With the world experiencing the Great Pause for the COVID Pandemic, commodities like dried yeast can be difficult to find.  This may be a great time to get your hands into some sourdough.

And it turns out that sourdough starter is pretty hearty, so once you get a batch going, you can take it with you when the roads open back up again and enjoy fresh sourdough pancakes and bread anywhere you travel.

The secret to a good starter is to cultivate the mix of wild yeast and beneficial bacteria naturally found in the flour so that they thrive, giving off carbon dioxide bubbles that turn a flat, dense lump of glue into delightfully light and fluffy bread.  As Marcus Woo calls it “if the loaf is the body, the starter is the soul.”  Once these microorganisms are established, a good starter can “live” and be used for decades with a little care.

Sourdough bread tends to have a longer shelf-life than traditional yeast bread thanks to the acids produced by the microbes that prevent spoilage.  There is also some medical research that indicates the fermentation process of sourdough can help the grains be more digestible for some people with gluten sensitivities.  (Keep in mind, however, that some store-bought sourdough breads are “flavored” and not actually created by a sourdough process, so may not have the same qualities.)

There are two methods to getting a good sourdough starter: 1) get some from a friend (or order online), or 2) start your own. 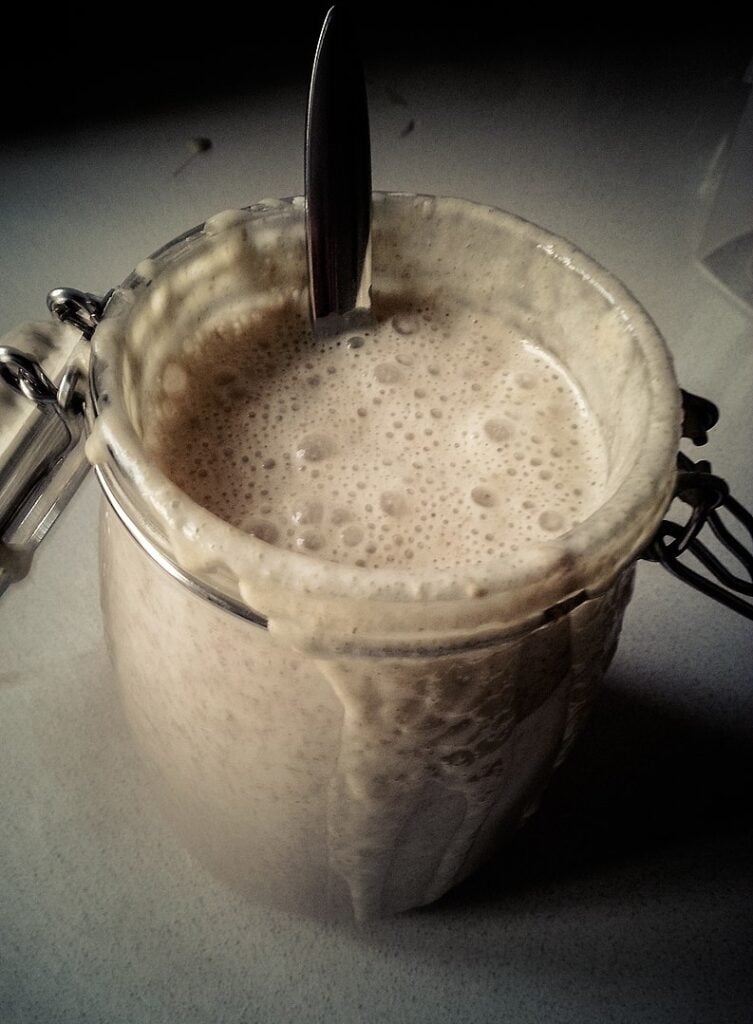 Mix ½ cup flour with ¼ cup room-temperature water in the mason jar.  It should form a thick paste.  It’s ok if it is lumpy.  Place a lid loosely on the jar (don’t tighten it—the off-gassing will create pressure) and let it sit at room temperature (~70F) for 24 hours.

Check your mix after 24 hours.  You may not notice any activity, or you might see some little bubbles forming.  If you don’t see bubbles, let the mixture rest another 24 hours (sometimes it takes a little while for things to get going.)  If there are bubbles (or after 48 hours), remove half of the mixture and add in another ½ cup flour and ¼ cup water.  Mix well, cover loosely and let sit.

With the half you removed (called the “discard”), you can either start another colony by feeding it as you did the first half, or you can use it in a Sourdough Discard Recipe to make something like crackers, pancakes, banana bread, or pop-overs.  There are a ton of ideas online.

You should see some bubbling and maybe notice a volume change or maybe some warmth and whiffs of that good sourdough scent (it should smell sweet and tangy, not unpleasant or “bad”).  Now you will begin feeding the starter twice a day, as evenly spaced as you can.

Each time you feed the starter, you start by removing half into another container, then adding in ½ cup flour and ¼ cup water, stir and cover.  It is also fun to try using different flour typed for varied flavors (maybe experiment with one of the discard groups).

Feed twice a day, discarding half, adding in ½ cup flour and ¼ cup water each time.  The starter should start looking visibly active, bubbling, rising (close to doubling in size) each feeding.  Use the discarded portions for baking or new colonies.

Your starter should double in volume within 6 hours of feeding.  Give it one last feeding and let it sit for 8 hours.  Test the starter with a Float Test.  Take a teaspoon of the starter and put it in a glass of water. If it floats, it is ready to make bread!  (If it doesn’t pass the float test, just keep feeding it twice a day for a few more days until it is consistently bubbling, rising, and doubling—and passes the float test.)

Once it passes the float test, place the starter in a clean jar for long-term storage.  You can store it in the refrigerator and feed it once a week using the same method (warm it to room temp first), discarding any liquid that accumulates.  You can take it with you on the road as well for fresh sourdough anywhere you roam!

NOTE:  If at any point the starter starts to discolor, mold, or smells “bad”, there may be other bacteria introduced (i.e. from a not-so-clean jar) and you will need to throw it out and start over.

See also: How To Make Bread When You’re Camping…Using Just A Flower Pot!

The post Try Your Hand At Sourdough: A Nomadic Favorite appeared first on RV LIFE.